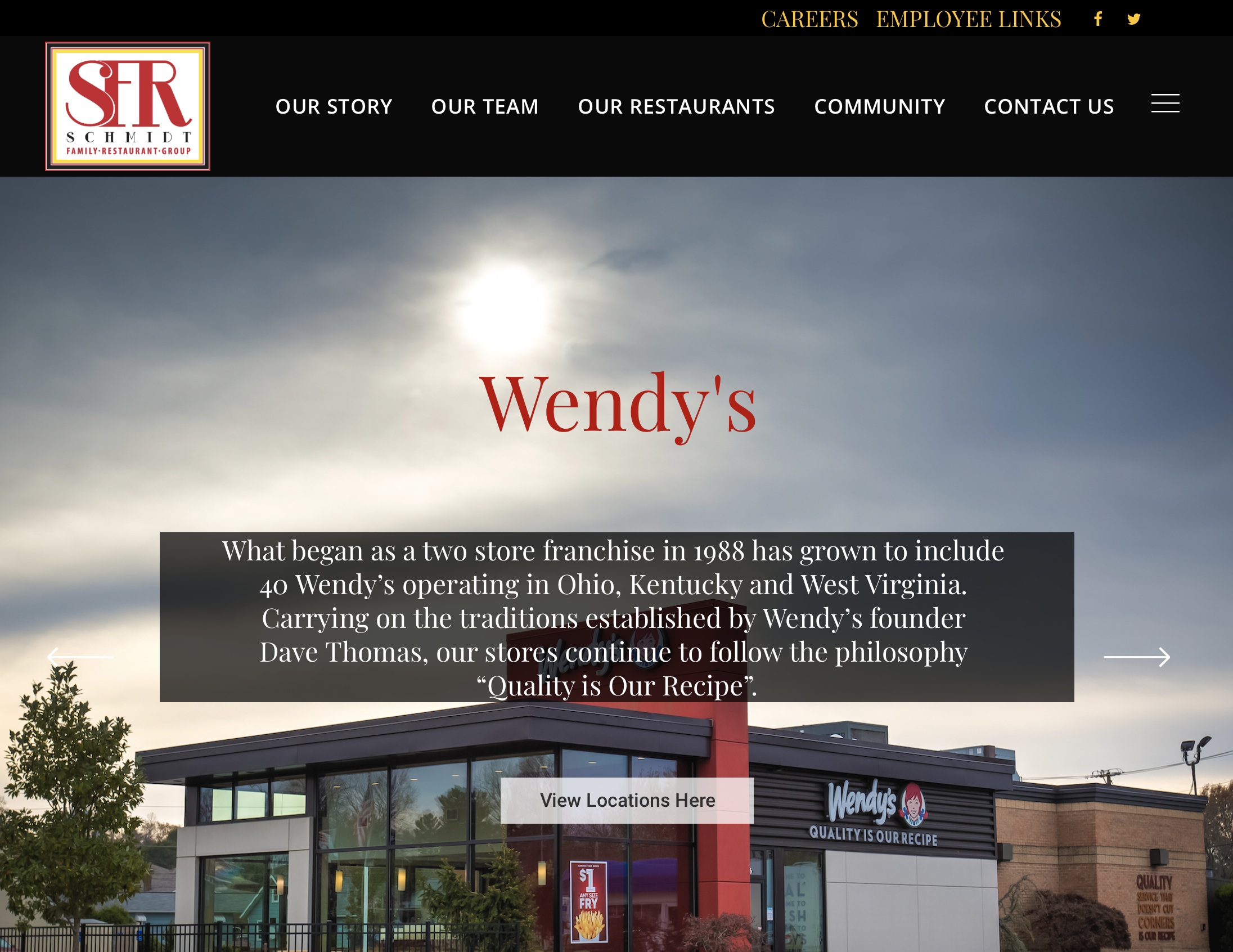 Scott Schmidt was born into a working-class family of eight children in a little town in Southern Ohio along the banks of the Ohio River. He learned early on that hard work paid off, and when he was hired as an assistant manager at the local Wendy’s restaurant in 1975, he knew he had found his passion. After 13 years working every conceivable position, Scott took the leap and purchased two Wendy’s franchises in his hometown of Portsmouth, Ohio.

In 2004 he added another restaurant concept to his portfolio – Buffalo Wild Wings. This bar & grill, which was founded in Columbus, Ohio was rapidly growing franchises across the United States and Scott saw the opportunity to build one in Portsmouth. It was so wildly successful that he has built four more B-Dubs, two more in Ohio and two Kentucky.

Scott’s interest in the restaurant business has been carried down to his two sons who are both involved in the company. His oldest son, Aaron, serves as a partner while his youngest son, Justin (“Juice”), is following in his father’s footsteps and in 2015 was named President of Schmidt Family Restaurant Group while also serving as a partner in the business.

The dedication and commitment to excellence displayed by the team members within Schmidt Family Restaurant Group has not gone unnoticed by others in the industry. The Portsmouth Buffalo Wild Wings has achieved silver status awards three times from Buffalo Wild Wings, Inc. for sales over the course of a year.  In 1997, Scott was presented the Wendy Award. This award is presented to franchisees possessing high operational standards, a commitment to training and development, and proven success in local store marketing. In 2006, our Wendy’s franchise was honored with the prestigious Dave Thomas Founder’s Award which is presented annually to the franchise that best embodies the values and business approach of Wendy’s founder Dave Thomas. Scott was then awarded the Old Fashion Franchise Association Citizen of the Year award in 2012 for his personal efforts in giving back to the community. To top it off, in 2013, Scott was inducted into the Wendy’s Hall of Fame. This award recognizes company employees and franchisees for extraordinary efforts and significant achievements in support of the Wendy’s system.  At the end of 2015, Schmidt Family Restaurant Group acquired 25 additional Wendy’s restaurants in Ohio, Kentucky, and West Virginia.

Finally in 2018, Juice was presented with the Wendy Award.  There are few franchises in the Wendy’s System with two Wendy Awards and even fewer Father-Son teams.

Today, Schmidt Family Restaurant Group encompasses a total of 45 restaurants stretching across three states. The passion Scott feels for his business can be best summed up by a statement he made in an interview: “I’ve been in this business since 1975, but I like to say I’ve never really had a job. I won’t say it hasn’t been hard, but I enjoy doing what I do too much to call it a job. From top to bottom we have a great group of people and they are the reason we are successful.”